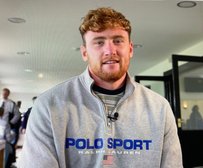 The Kesteven Rugby family welcomed Ollie back to Black Army’s Woodnook home on Sunday after his recent Tigers and England duties.

Marking the end of the club’s official playing season, President's Day was a celebration of the past year’s many successes. It was also an opportunity to pay tribute to the players, coaches, volunteers, parents and supporters who work tirelessly to keep Kesteven’s family-oriented focus and the values and traditions that have been built through generations.

These accomplishments were alongside a number of individual successes across Kesteven’s boys and girls sections, including NLD representation.

Minis, juniors and Colts were absolutely delighted to receive their medals and trophies from Ollie, who played as a junior at Kesteven for two years before joining Nottingham Rugby, then Leicester Tigers before debuting for England against Italy in February this year.

Ollie generously gave his time to have photos taken and chat to friends old and new friends and was thrilled to be back at Woodnook. “I haven’t been here for over two years now and yet everyone welcomes me and says ‘hello’. There’s just that welcoming atmosphere here.”

Sharing his experiences of what it meant to don the England shirt, Ollie said: “It’s been an incredible experience. When you start playing rugby and think you have a shot of going professional, that is what you aim for, playing for England, Lions. If someone said to me at the start of the year that I’d debut for England, I’d have laughed in their face. It’s something I wanted to do but didn’t think I’d do it this year.”

Asked what advice he’d give to all the many minis and juniors enjoying President’s Day, Ollie said: “I didn’t expect to go any further than club rugby. Just go out there and enjoy it!”

'It's a beautiful thing'

Angus Shaw, Kesteven Rugby Club’s President, thanked everyone who joined him and Ollie for the celebrations, as well as those who could not attend but were there in spirit. “It’s called President’s Day but it’s a day about celebrating everything that’s good about our Club and our game.

“From the Under 6s to the Senior teams, spectacular volunteers, parents and casual passers-by – huge respect to you all. What we witnessed today was a beautiful thing and testament to the efforts and care of those who’ve gone before us and those who walk amongst us.”